The Upcoming Space Age: Which Energy in Focus?

Construction, also known as "technology giving rise to civilization," has served as a barometer to gauge the viability and development of society. Then, where is Hyundai E&C’s core capabilities and technologies headed towards?

The Space Age is Upon Us 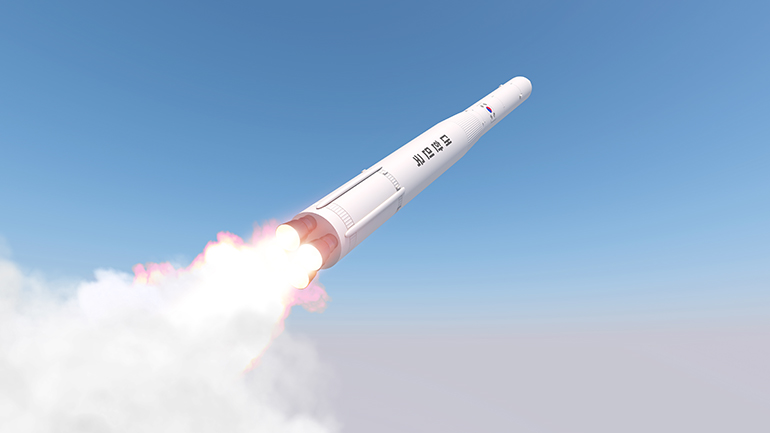 June 21, 2022 at 4 p.m. Nuri, a Korean space rocket developed by Korea, soared vigorously into space with a flame. Nuri delivered the performance verification satellite to the target orbit of 700 km and succeeded in two-way communication between the satellite and the ground station at 3:02 a.m. on the 22nd. As a result, Korea has become the seventh nation in the world to have launched a commercial satellite with its homegrown technology.

The second launch of Nuri was most different from the first launch in October last year because it carried actual satellites to verify various space technologies developed by Korea. It also applied the technology that Korea is attempting for the third time in the world: space nuclear battery. Korea is preparing to equip its lander with nuclear battery, to be sent to the moon in 2031. In other words, we are entering an era of nuclear space. 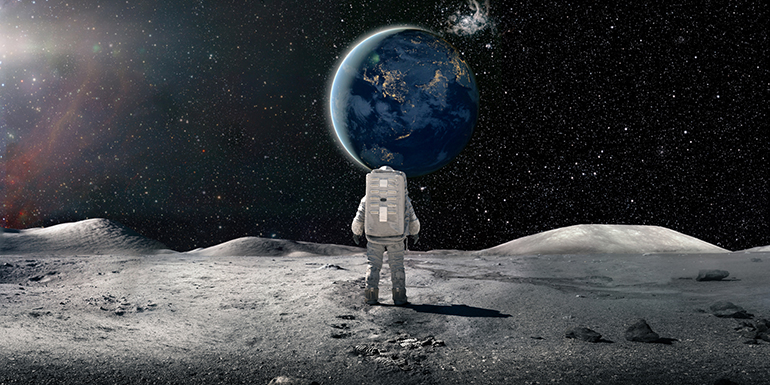 Nuclear batteries, which convert radiation energy emitted from radioactive isotopes into electrical energy and then are used as batteries, are highly utilized in space such as the moon, where days and nights last 14 days each and temperature drops to minus 170 degrees Celsius at night. Nuclear batteries do not let the satellite equipment to cool down and generate minimal electricity even at night when solar power is impossible. Dr. Hong Jin-tae of the Korea Atomic Energy Research Institute(KAERI) explained, "If the lunar lander is equipped with a nuclear battery, it can work on missions even at night, and the duration of mission can be extended to more than two weeks."

However, the Nuri nuclear battery, which was launched this time, did not carry radioactive isotopes. This is because radioactive materials cannot be launched into low Earth orbit under international agreements. The KAERI instead embedded a device that generates the same amount of heat as radioactive isotopes, and if the performance test is successful, the lunar lander will be equipped with an actual radioactive isotope battery. When the plan becomes a reality, South Korea will be the third country to launch its own homegrown nuclear system into space after the U.S. and Russia.

Nuclear energy, which is familiar to Koreans for their power plants, was first used for space exploration abroad. The case in point is Voyager, an unmanned probe launched by NASA in 1977. As solar panels are useless when travelling far from the sun, Voyager is also operating even at the end of the solar system powered by a kind of nuclear battery called a *Radioisotope thermoelectric generator(RTG)”.

*Radioisotope thermoelectric generator(RTG): A generic term for a generator that uses the principle of generating electromotive force by bonding both ends of a different type of conductor or semiconductor and applying different temperature to the two joints. There are various ways depending on the heat source.

The RTGs use a thermoelectric element. The device, which generates electricity from the heat generated by nuclear fission of radioactive isotopes, was used for Galileo probe for Jupiter, Cassini probe for Saturn, and Curiosity rover (mobile exploration robot) on Mars. Dr. Son Kwang-jae of the KAERI said, "The RTG technology is a strategic technology that is used for space exploration, defense, and deep-sea exploration," adding that, "No country has decided to transfer technology, so there was no choice but to develop it independently." This technology is useful not only in space but also on Earth, Dr. Son said, "A system, capable of identifying internal information when external power supply of nuclear power plants is cut off, can also be operational with RTG."

Teleportation of military satellites is also solved by nuclear power

Just as military tensions between the U.S. and Russia have been escalating due to the recent war in Ukraine, the relationship between these two countries in the field of space exploration is no different. When Russia destroyed a broken satellite with missiles last year, the U.S. engaged in a psychological warfare, pursuing to protect military satellites. At that time, America’s alternative option was nuclear power, because fission energy provided a powerful force for satellites to move their orbits in an instant.

DARPA of the U.S. Department of Defense is working on the "Nuclear Thermal Propulsion(NTP)" program to load small nuclear reactors into military satellites and provide the power needed for instantaneous maneuverability, including participation of private companies such as *Blue Origin led by Jeff Bezos, *General Atomics, and *Lockheed Martin Corporation. .

*Blue Origin: It is a private spaceflight company founded by Amazon CEO Jeff Bezos and succeeded in test-launching its own space passenger vehicle in 2015.

*General Atomics: It is one of military companies in the U.S. that produces nuclear reactors and aircraft.

*Lockheed Martin Corporation: It is a government-oriented company responsible for the production of aerospace and defense equipment.

Nuclear power plants boil water with heat from radioactive isotopes and turn turbines to produce electricity. On the other hand, satellites gain gas propulsion from heat from radioactive isotopes. If liquid hydrogen cooled to minus 253 degrees Celsius is vaporized and sprayed using heat from nuclear fission, it is possible, within few hours, to move up to 36,000 kilometers, which is a telecommunications satellite orbit. Considering that it currently takes days for satellites to travel the same distance, the propulsion is just amazing. In the case of military satellites, as they frequently change orbits and are more competitive in smaller sizes, it becomes obvious that small nuclear power has comparative advantage over conventional methods using wide solar panel. For your information, DARPA will test a nuclear heat-propelled satellite in space in 2025.

Nuclear energy propelled vehicles for space exploration are also being developed. In July last year, NASA ordered three companies, including General Atomics, to design nuclear reactors for nuclear heat-propelled spacecraft through the Idaho National Laboratory under the Department of Energy. When NASA completes a reactor-equipped spacecraft named PADME, which is scheduled to test-launch in 2026, the travel time to Mars will be reduced by three months compared to a chemical fuel-based spacecraft. In addition, the U.S. Department of Defense announced plans to use small reactors rather than solar panels to generate electricity and apply it to ion engines, which is expected to further diversify the nuclear power applications in space.

A nuclear power plant built on the moon 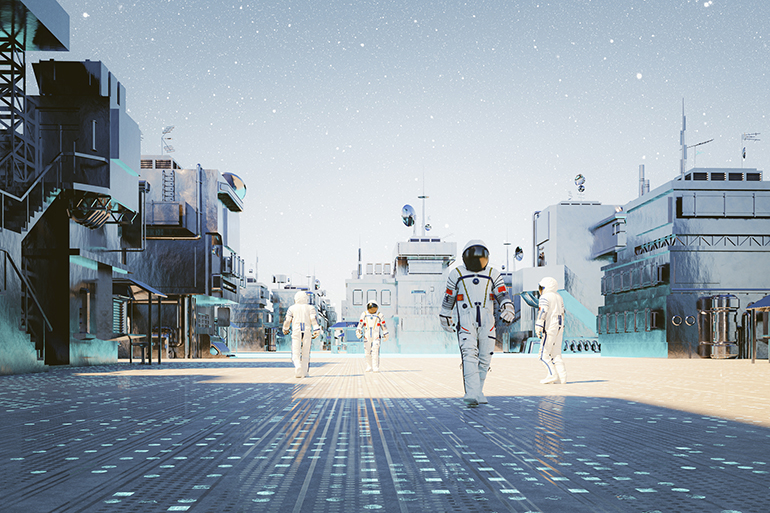 In the future, even on the moon, people will live on electricity produced by nuclear power plants. This is because the U.S. has decided to build a nuclear power plant on the moon. The U.S. government has renewed its Artemis program, which has been suspended since Apollo 17 in 1972, to land astronauts on the moon in 2025, and to establish a lunar base for astronauts to reside by 2030. NASA decided to build a nuclear power plant within the base this month and entrusted the development of the reactor to Idaho National Laboratory. The two organizations will build durable nuclear fission reactors on the moon within the next decade that can generate high-throughput generation regardless of the availability of the sun.

The Idaho National Laboratory presented detailed standards for the lunar nuclear power plant last month. The first reactor to be installed on the moon is based on uranium fission reactions, like the nuclear power plant currently operating on Earth, and the decision was made in consideration of the rocket's cargo-loading capacity because the reactor has to be carried on a rocket to the moon. It is expected to be the same size as the SMR (Small Modular Reactor), which is drawing attention recently, as it has to fit a 4m×6m rocket and weigh less than 6,000kg. In addition, the lunar nuclear power plant is expected to be used for Mars exploration. Scientists argue that the moon could become an outpost for deep space exploration because shooting a rocket from the moon with weak gravity would require much less energy.

"Abundant energy will be the key to space exploration in the future," said Jim Reuter, head of NASA's space technology mission. He was also optimistic about the future of nuclear power adding that, "A nuclear fission system can supply power on the moon and Mars but also promote technological innovation on Earth as well as."

[ A bird's eye view of the SMR160 model that Hyundai E&C is jointly developing with Holtec in the U.S. ]

As domestic companies are also competitive in the SMR field, the possibilities of entering space have become more extensive. Among them, Hyundai E&C stands out as it is the first Korean builder to participate in the detailed design of SMR in the U.S. and promote its commercialization for the first time. The SMR-160 model, which Hyundai E&C participates in the development, is a 160MW light-water reactor and is evaluated as a general-purpose reactor that can be used anywhere, such as deserts and polar regions. It was selected as the U.S. Department of Energy's “Next Generation Reactor Demonstration Program” model after safety was verified during simulations of risk scenarios such as Japan's Fukushima nuclear accident and terrorism, and will be actually deployed at the U.S. Oyster Creek nuclear power plant decommissioning site once the detailed design involving Hyundai E&C will be complete.

Hyundai E&C President Yoon Young-joon said, “We will accelerate SMR commercialization with the SMR-160 model that will debut in the U.S., a nuclear powerhouse,” expressing confidence, "We will solidify our position as an energy market game changer by combining the world's best technology and business capabilities." Hyundai E&C and Holtec are considering joint entry into not only in the U.S. but also 15 countries around the world, seeking hegemony in the SMR market which is becoming more fiercely competitive than ever before. And this technology will also soon be applied to space, becoming an active stage for these two companies to thrive on in the future as well.

◆ This column is based on the author’s subjective view and may differ from the editorial direction of Hyundai E&C.

Local Pick! Everything You Should Know When Travelling in Qatar, Gripped with Soccer Fever!